As Valentine’s Day approaching, roses are springing up everywhere. I’m reminded of the days I worked for Whole Foods where Valentine’s meant pulling all the girls up to pose for super rose sales. They insisted the men would need “a feminine touch” to help choose. Really, we think I have a feminine touch? But then the nice produce boys explained that floral arrangements are really just geometry so, whew, safe. In fact, despite my former trauma,  I’ve been buying roses for weeks now at Earth Fare with a delightful dozen for $10 because, guess what?

I love roses. How can you not? They may be far overplayed by the flower industry as the most romantic flower, but they’re silky and subtle and it feels like heaven to brush them against your cheeks. I love them when they’re fresh and beautiful, and I love them when they dry and wrinkle because either way they remind me of wonderful botanicals.

Lately, I’ve been building a witches lair in my basement to start working on botanical projects. I’m building up to extractions and distillations of more complicated measures, but last week looking at my wilting rose petals, I decided one of my first trials in back-to-basics would be rosewater.

Rose petals are widely used in teas and in cooking. They’re the foundation of rosewater which can go into delectable morsels or on your face to act as a toner. As with most biological products, they’re loaded with antioxidants -polyphenols, anthocyanins -and all the free-radical fighting goodness. There is some discussion that they’re rich in vitamin C, but that’s mostly their fruit, the rose hip, which is related but technically different. Because I’m a nerd stuck somewhere between relying and trusting folk medicine but desiring hard data, here are a few scholarly articles about the benefits of rose petals in a clinical sense. 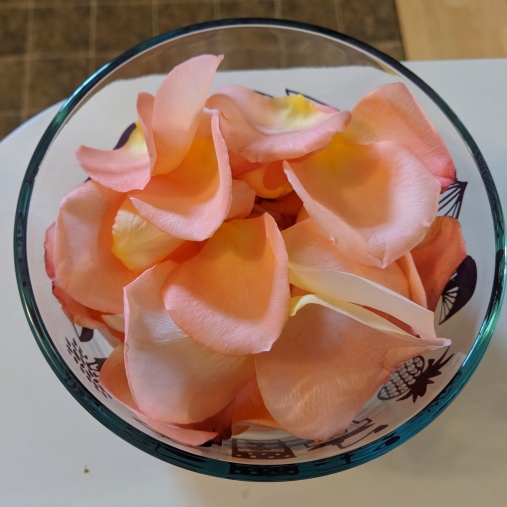 DIY Rosewater: A Brief “How To”

The problem of extracting bioactive components from their sources is that the compounds locked inside the fruit and flesh are extremely fragile. I’ll not bore you by describing the functional groups on an antioxidant molecule and how quickly they fall apart when you isolate them from their matrices, so just trust me. Most distillation and extraction is difficult. It’s best to leave it to the professionals.

But, thankfully for you, rosewater is pretty easy. Pick your petals from the stems as shown above. Throw them in a clean stock pot, cover with water, and begin to heat. It’s best to keep the water just below boiling to preserve some more of the compounds if you can, so watch it closely. After about 20 minutes, the petals will lose their color, and you’ll be done. Remove from the stove, strain the roses out, and boom! Rosewater for all.

As I was exploring some other DIY sites to see if it really was that simple, I found another method which has you place the glass bowl on top of a brick surrounding the rose petals.Invert the lid on the stock pot and place ice on the inverted lid. To the former organic chemistry major, aha! Boiling stones and a condenser. Boiling stones help a solution boil more evenly by distributing the heat and breaking up bubbles. When steam hits the cool top covered in ice, it condenses and drips down, ideally into the bowl. Now that is some truly DIY distillation.

I tried this method, but I think my brick was a little too bricky. As an alternative, I’m going to get some smooth river stones from Michael’s or Home Depot or, you know, a river. They’ll offer the same smoothing activity but won’t give that grainy aftertaste of concrete. Back to my original method!

And there you have it. Your final product will be a light yellow color, maybe more pinkish if you used red roses. You can now use rosewater to flavor your cooking or anoint your body as you will.

For the cocktail enthusiasts, perform the following to transform this magic elixir into a marvelous simple syrup.

Combine in a clean pot. Heat slowly to just below boiling to let the sugar dissolve into the water allowing for maximum mixing. Remove from heat to cool and store. Good for about a month.