My fiancé says that instead of tracking the number of books I read, I should count pages because I often read huge books. Such is the summary of my quarter two reading. If the average book is 250-300 pages, my running total for quarter two jumps from 6 to 14 (when you consider I’m halfway through It). But if we’re going by books, 6 it is.

Next month I’ll be going to the beach with my family and September holds a vacation to France, so I hope to make up my time in books then. As it stands, this battle with the behemoths took a significant amount of time, but all was well worth it. With that, welcome to the Quarter Two Book Review.

1. The Stand by Stephen King

How do I love thee, let me count the ways. If you’ve seen me in the past year, I’ve probably regaled you with my new love of Stephen King. For my entire life, I never read any Stephen King. I knew him as King (ba-da-cha) of the horror genre, a genre in which I had no interest. Then, I burned through the library’s collection of audiobooks and was left with the two options -go ahead and join Audible again or attempt to find a generic author I liked. I decided to try Stephen King when a copy of Needful Things was immediately available.

With that, I learned what I had been missing -that while Stephen King may sometimes employ a little bit of cringeworthy gore, he is a phenomenal writer. The pictures he paints of characters makes them lively enough to pop out and sit beside you as you read. From the prissy New Englander to the rough riding Texan to the psychopathic clown, everyone is unique and everyone is so real. And the language! Oh, the language! Every word precise and perfectly placed. As he advised in his book On Writing he hates adverbs. Though admittedly unavoidable sometimes, they’re weak, and you know it. Instead of the adjective, give me the portrait.

The Stand is no different. My version was “The Complete and Unabridged Version” published in 1990 clocking in at a whopping 1152 pages. Everything is important and none of it is wasted. When a deadly virus escapes the custody of its laboratory birthplace, 99% of the population is wiped out in its prolific spread. Slowly but surely, the survivors band together -one camp of good, one camp of evil. As all the players take their sides, so begins the struggle for the remaining world until the final Stand which determines its fate. To say more would be a travesty, all you need to know is that you must read it. 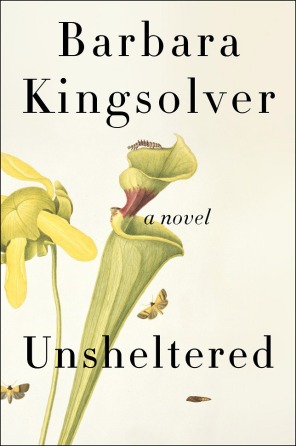 The first book I ever saw by Barbara Kingsolver was ‘The Poisonwood Bible”, and for years I played a game. I’d wander through a bookshop, be tempted by the elusive markings on the cover, and pick up it to explore. I’d get through the first sentence describing the tale of missionaries in the Congo, roll my eyes, and replace it on the shelf. Until the day I’d recently finished her nonfiction work about homesteading, “Animal, Vegetable, Miracle” and become enchanted with her nonsensical, humorous style. I picked up The Poisonwood Bible one more time. This time it stuck, and I’ve been a Kingsolver devotee ever since.

I love Barbara Kingsolver for her skill in weaving together worlds, and Unsheltered is a prime example. As in Flight Behavior published several years prior, Kingsolver tells the story of a small, average, everyday American town in the heart of global conflict. In the present day, siblings Tig and Zeke battle out on the duties of moderation and conscience consumption against the need for constant capitalist growth while their Mother Willa frets about the house falling down around them and how to find health care for their dying grandfather. Entwined is a tale from the past, a devoted school teacher Dr. Thatcher battles the powerful establishment to do what’s best for the children in his courses -teach them evolution so they can understand the natural world.

Unsheltered has received more criticism and negative reviews than the normal Kingsolver novel, most participants citing a dislike of the politicized nature of the novel. They say it’s “too preachy”. I look at it with the same eyes I viewed Bill Nye when he released his Netflix show. For a person who cares so much about the world they love, they can’t help but go to war with whatever means they have. For Barbara Kingsolver, that’s a war of poetic words, quietly asking you to please, please consider what you’re doing and act for the greater good.

3. The Kingdom of Copper by S.A. Chakraborty

The Kingdom of Copper is the sequel to The City of Brass. We received City of Brass last year as a free book for purchasing a monthly book club subscription as a Christmas present. Why did we choose it out of the plethora of books available? It’s a Middle Eastern based fantasy novel! Do you know how often I get those? Like never. Inevitably, fantasy novels are set in some pseudo-Britain/Europe/Maybe even as ambitious as Russia, climate. Sure, fairies, dwarfs, and the like root in the European tradition, but it’s not as if other cultures don’t have fantasy. Both of us enjoy the Myths and Legends podcasts which offers tales of folklore from all over the world. We figured The City of Brass would be a novel both us could enjoy.

The Kingdom of Copper has a map of the proposed principalities of the novel’s settings, and if you got a feeling for the tension of an Indio-Pakistani-Islamic society, the map confirms it. The story of a staunch and strict religious sect set against the more lenient and secular one certainly isn’t a new tale for the Middle East. But, in this one, there are genies or the more traditional djinn. The imagery of Kingdom of Copper is Aladdin x10 with salient descriptions of the lavish palace and bazaars set alongside the mystical powers of djinns and other supernatural beings. As opposed to City of Brass which is a world introduction, Kingdom of Copper is a world of conflict. The ruling families are at war, and the introduction of a powerful healer from the human world, largely indifferent to the play between the battling courts but concerned for the common people, sets events in motion to bring the tension to a head.

Alas, Kingdom of Copper offers more questions than answers, and the final resolution won’t be had until the trilogies completion in The Empire of Gold. As I may have mentioned in my previous post, I’m trying to be better about mixing in more diverse authors into my seemingly standard old, white dude cast (sorry Stephen, I still love you). S.A. Chakraborty technically checks that box, but anyone who’s interested in fantasy and illustrative worlds should enjoy the Daevabad trilogy. The mythology surrounding the series would make any Tolkien fan glow.